Jesus DVDs & Bibles In Many Languages

We have both Bibles and Jesus DVDs available in a variety of languages.  Let us know if you are interested in receiving one of these either in English or in your own language.  Contact Carol if you are interested in receiving any of these resources and to check for availability.  These have been made available free of charge as a result of the kindness of a foundation.

The Jesus Film Project has been seen by more than 6 billion people in 236 countries and has been translated into 900 languages.  Taken straight from the Gospel of Luke, "JESUS" is recognized as one of the most accurate depiction of the life of Christ ever put on film. Filmed entirely on location in Israel, it takes you back nearly 2,000 years into the life and time of Jesus Christ.

The "JESUS" film can also be viewed on-line in every language.  Jesus DVD - 120 minutes

Here are some of the DVD's we have available - Just ask us for one! 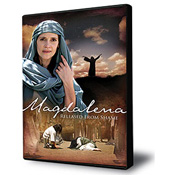 Mary Magdalene acts as both narrator and participant in "Magdalena: Released From Shame," as she traces through the story of not only her life, but those of others that were transformed by Jesus, and were powerfully released from shame.  The love she experienced changed her life, the man she followed changed the world. "Magdalena: Released From Shame" is the true story of Jesus seen through the eyes of Mary Magdalene